The Fourth Time Is the Charm

Jonathan Almencion was four years old when his mother first brought him to have his cleft palate treated at ICSF’s Cadiz, Philippines, cleft palate mission in 2011. Unfortunately, on that occasion, Jonathan had pneumonia and had to have his surgery cancelled. The following year Jonathan’s faithful mother again brought him to the mission but, again, he had an infection and could not receive his palate surgery. 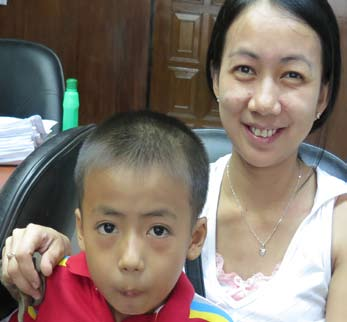 Jonathan and his mother one week after his cleft palate

When the same sequence of disappointing events happened again the third year, Jonathan’s mother became determined. She communicated with Dr. Williams by email to make sure that the team was aware that Jonathan would be coming again.

When the July 2014 Cadiz mission started, now-seven-year-old Jonathan and his mother were again there. Jonathan received a battery of tests revealing that he was perfectly healthy or the surgery to proceed safely. “It was among the widest cleft palates I have operated upon,” commented Dr. Geoff Williams after the surgery. “But I was gratified at how well everything went. I feel confident that the repair is adequate for Jonathan develop normal speech”. Jonathan’s mother sent out many thanks to the ICSF team on Facebook and in person, including to ICSF’s supporters back home. Sometimes the fourth time is the charm.