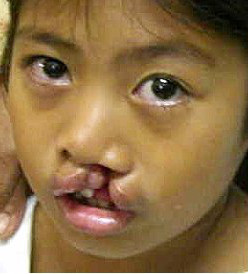 Seven-year-old Marissa never wanted much for Christmas. All she really wanted was to be normal. Marissa was born with a cleft lip and palate into a poor family in a poor country. In the United States, children born with cleft deformities are treated before age one. They never have to go to school with the dread of being ridiculed and left out. Things are different in poor countries.

Marissa’s mother loved her daughter and grieved when she was treated unkindly. Marissa’s mother suffered anxiety, not knowing if treatment would ever come along for her daughter. Although medical teams had come to Marissa’s region in the Philippines, her mother had stayed home, having heard about the large numbers of children treated in a short time.

Marissa’s mother wanted the best for her daughter—and so she waited—but did not know if the right help would ever come. Then one day she heard about a new medical team that was coming to her town—a team that had a reputation for taking a lot of time for each child—and learning each child’s name. The team was the International Children’s Surgical Foundation. 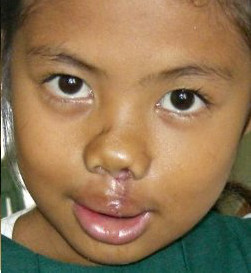 Marissa’s mother felt good about the new team and decided the time was right. She would not be disappointed. After her daughter’s three-hour operation, the doctor stayed and cared for Marissa for a whole week. At the end of the week, Marissa, for the first time, smiled normally. Her mother’s prayers had been answered—her daughter had received the long-awaited gift, The Gift of a Smile.

This holiday season, give the gift that will last forever— to a poor child in a far-away land—The Gift of a Smile.

This holiday season, give The Gift of a Smile by donating today!