Leann had always celebrated Christmas but had never thought of it as a time of gifts and presents. In fact, Leann and her family were too poor to exchange any Christmas gifts at all. Christmas time, 2018, was especially hard for Leann. She, ten months previously, had given birth to a daughter, Aerose, who had a severe facial deformity, a cleft lip and palate. Ever since that day Leann had grieved for her daughter’s future. She envisioned teasing, ridicule, rejection and loneliness. But then in late November, 2018, Leann heard about an American cleft team coming to her region. She further heard that the team took great care in performing the surgeries and giving follow-up care to the kids, unlike the other mission teams in her region who performed 45- minute surgeries and left town the day of the last surgery. Leann felt a feeling of hope and wondered if Christmas had something special in store for her and her family.

Little Aerose, underwent a three-hour surgery by ICSF the first week of December, 2018. In spite of typical postoperative swelling, Leann could see that something special had been given to her daughter. It was like a gift. As time passed and the surgery healed, Leann could see more and more that her daughter had received the Gift of a Smile. Year by year, her daughter’s smile became more and more beautiful. Christmas 2018 had come in a way she never imagined. Her daughter, once deformed, was now beautiful! 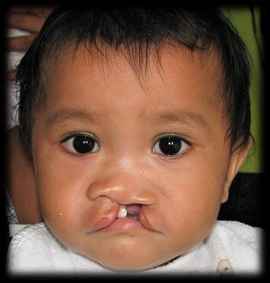 Aerose, age ten months, before receiving the Gift of a Smile by ICSF 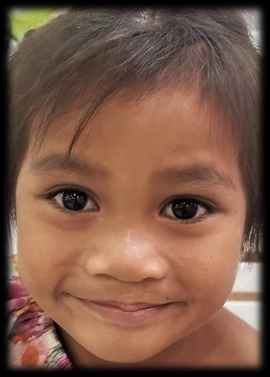 Aerose, using her Gift of a Smile, four years after lip surgery by ICSF