Jayson was just one of a number of children who did not receive surgery by ICSF in the May Philippines mission. He, and 130 other children, had registered for the mission in Dipolog, but the ICSF team was unable to accommodate all who came, in spite of working past midnight on several occasions. Dr. Williams explains, "With this large number of kids who showed up to be treated, we could have remedied the problem by cutting down on quality and performing the surgeries quickly. This, however, would have been against ICSF’s principles. Or, we could have simply apologized to those left over and not treated them. Instead, we did what only ICSF is known for doing. We scheduled an impromptu, follow-up mission six weeks later and gave every child, including Jayson, a surgery date for that time." 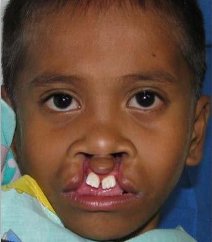 It was challenging, but ICSF kept its promise to come again to Dipolog on July 6, six weeks after the previous mission. Upon arrival, however, the team was greatly disheartened to see that Jayson, in spite of his eagerness for surgery, had not returned for his treatment. The team went ahead and worked throughout the week, treating the other kids who had kept their appointments. After a long week of work, including many late nights, the team finished all of the surgeries by 5 p.m. on Friday. As the exhausted team was preparing to pack up and leave, lo and behold, Jayson appeared! His family had been confused about the team's return date but had heard that same morning, that the team was at the hospital. Jayson and his family raced to the first bus in an effort to make it to the hospital in time.

Jayson hours after his surgery

When Dr. Williams asked the tired team if they were up to doing Jayson's surgery, Dr. Majong, the Filipino ICSF anesthesiologist said, "Why not? That's what we are here for!" Jayson underwent blood tests and then was transferred to the operating room where the team labored with all the painstaking care that Jayson deserved. Jayson's operation was finished, complete with his new smile, just after midnight.