Emver’s parents were worried. Earlier, they had been elated that their son had had his long awaited cleft lip surgery. It was now twelve days after surgery, however, and 18-month-old Emver was beginning to show signs of a serious infection. All had been well at his 7-day postoperative check-up by the ICSF team. Several days after the check-up however, the lip suture line became redder than the day before. The following day swelling had set in. Now their son’s nose was tense and swollen. Emver also now had a fever. It was obvious to the two young Filipino parents that something had to be done-and soon.

They thought about going back to the hospital and hoped that the ICSF medical team had not left the country yet. They knew, though, that volunteer teams come and go quickly. They felt lucky just to have had a check-up one week after surgery. As they looked at their son, their worry became overwhelming. They decided to make the several hour journey to see if the ICSF team was still in town. As they arrived at the hospital clinic, they were relieved to see a number of other children with recently repaired cleft lips waiting in the clinic chairs. They were greeted by a nurse who said, “Yes, the ICSF team is here right now seeing patients.” A flood of relief came over the young parents. They waited briefly and then were called into the evaluation room. 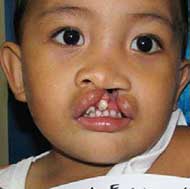 Emver with infection, 12 days after surgery 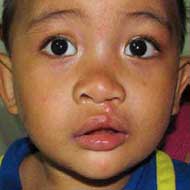 As soon as I looked at Emver, I could tell that he had a serious infection. This was of great concern to me, knowing from anatomy training that the venous blood of the nose and upper lip drains inward toward the brain-and that bacteria can follow the same route. Deaths, in fact, have been reported as a result of infections in this area of the face, known as Little’s Triangle. As we held the struggling boy down, I was able to see exactly what to do. I opened a small area of the suture line with scissors and was met with a gush of pus. Emver had developed a serious abscess. I used a small IV catheter to irrigate the abscess pocket out. Thankfully, the nose became soft. I was relieved for Emver and his parents. As I said good-by to the trio a short time later, I breathed a sigh of relief. We had been available to take care of Emver’s post-operative need. I was glad that ICSF performs good follow-up care on its patients. Other teams that I had volunteered with leave on the last day of surgery or the following morning.

What would have happened to Emver if we had done the same? I have talked about ICSF’s uniqueness before but I don’t mind repeating myself here and now. ICSF is the only volunteer surgical organization that performs this degree of post-operative care. Patients in well-developed countries expect this type of care, and they receive it. Why would anyone think that the children of poor countries deserve less?

To our supporters: thank you for making it possible for us to care for Third World children at the highest standard possible. We take their lives and well-being seriously and we know you want us to keep doing it this way. Once again, “Everyone Was Born to Smile.”