“These poor folks don’t care, Geoff...you don’t have to make them look perfect!” The date was late February 2006. I had been invited to join a large volunteer team to perform cleft operations in the Philippines. The senior surgeon continued, “These poor folks are just glad to have the hole closed — they really don’t care if it doesn’t look perfect.” I listened quietly as I continued to work on nine-year-old Jenny’s bilateral cleft lip. I had been operating for more than three hours and obviously had drawn the attention of the group’s leadership. It was late — at least for the team I was with at the time — past 5 p.m. On the first day of the mission, in a meeting, the group’s leader had announced that our goal was to be out of the hospital by 4 p.m. every day so that we could make it to the beach for a few hours of R&R.

I didn’t respond to my friend’s words except to say, “So, poor folks don’t care?” “No, they really don’t — look at what time it is,” he responded quietly. “I’ll be done in about a half an hour,” I replied. As my friend walked away, I stared at Jenny’s face. I was using the meticulous bilateral cleft repair technique I recently had learned during a visit to the world’s top cleft surgeon, Dr. Court B. Cutting at New York University Medical Center. Jenny was now beginning to look like a normal child, there in front of me, asleep under anesthesia. I was amazed at the beauty her face had begun to take on. I paused for a second and thought about Jenny’s mother waiting outside, and wondered if she really didn’t care if her daughter’s lip looked good or not.

I knew the answer. Anything less than a beautiful lip would be a disappointment to Jenny’s mother. I knew this because I had been volunteering long enough to see many Third World mothers, their children standing in front of me, having had quick surgery in the past by a large mission group. “Can you operate again for my child?” they always asked in their native tongue. When I asked the question, “What exactly would you like me to fix?” they would only say, “It doesn’t look good, she wants to be beautiful.” In response, I generally stared at the little face, the flat and formless lip and the twisted nose, and got a lump in my throat. “Well, I can try, but there is a lot of scarring, and I don’t know how good I can make it look now after surgery has already been done. “ A weak smile usually appeared on the mother’s face. “Thank you, please try,” they aways said.

Looking away from the clock and back at Jenny, I thought, this little girl and her mother are not going to get a fast surgery so that I can go to the beach with the team. Later, around six that evening, Jenny’s mother smiled--not a weak smile. As I looked at my patient, I thought about the organization I had recently started. The realization suddenly hit me that ICSF would have to have its own missions, its own medical team — no more volunteering with other groups.

And so it is now with ICSF. We serve an average of 15 missions per year to eight countries — and not once has a patient received a fast or hurried surgery for any reason, much less so that we can head out to the beach. I hope that you, our supporters, understand how unique ICSF is. I have been around long enough to know, without a doubt, that no other organizations do what we do for our patients, in the manner that we do it. Thank you for helping us ensure that “everyone was born to smile.” 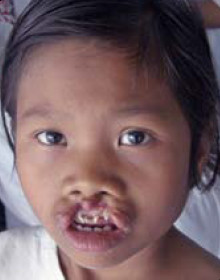 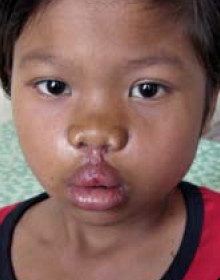 Jenny before and shortly after surgery