A Tale of Two Rosemaries

The first Rosemarie was 11-year-old Rosemarie Alcuernon. When I first saw her she looked like she had been extracted from a subterranean dump. Her hair was tattered and hanging partially over her face, although it did not hide her permanent scowl. Her cleft was particularly unsightly, and I am sure she had been teased and scorned mercilessly. Rosemary was one of the few patients I have encountered who seemed like she may be beyond hope.

Rosemarie’s surgery was a little over 3 hours, in keeping with ICSF’s goal of treating every child with the highest care possible. As I expected, Rosemarie was very uncooperative and sullen after surgery. I took some comfort, however, in knowing we had done our best. 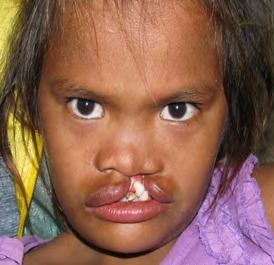 When the weekend arrived I felt sorry for the eight patients and their parents (including Rosemarie and her father) who would have to pass the time in the hospital. So, on that Saturday night, the team and I decided to get ice cream, soda, and balloons for a little party to help the patients and their families break the boredom.

At first, Rosemary didn’t want to have any part in the festivities. I got a little flash of inspiration, however, and asked all of our Filipino nurses to, one at a time, take a picture of Rosemarie with their cell phones and then show her the picture and tell her that she was “beautiful.” (Even though she needs further surgery, I actually thought Rosemarie was beautiful after surgery, with a nice full lip that most Western girls would be envious of.) At first Rosemarie refused to look at the photos, and when told that she was beautiful she violently shook her head “No.” After several unfruitful attempts by the nurses, I noticed a change. Rosemarie began to study the pictures of herself and quit shaking her head “No.” She started gazing longer at the photos and then smiled shyly. By the end of the party Rosemarie was running around with a smile so big that I worried about her recent lip surgery coming apart. She seemed particularly interested in interacting with us and the other kids. That night, as we said goodbye and left, guess who was the last remaining person waving to us through the glass door. Right. . . . it was little Rosemarie. 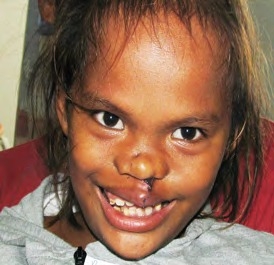 As we walked away I realized that I had witnessed a miraculous, almost instantaneous, transformation of self-esteem from the lowest possible level to an outgoing, happy child, all right before my eyes in a single evening. Her name was still Rosemarie Alcuernon---but she was now another person. She was now a Rosemarie with a bright future. The little dumpdweller was gone, replaced by Rosemarie No. 2 — with the brightest smile imaginable.

Thank you, ICSF’s supporters, for making Rosemarie’s miraculous transformation possible and for all the other transformations you have made possible.

Yes, everyone, including Rosemarie, “was born to Smile.”