“You’re not poor enough”, explained the mission doctor. Eighteen-year-old Resty had a severe birth defect of his left lower eyelid and was starting to have some scarring of his cornea and loss of vision as a result. He also had a deformity of his upper lip and nose. He had gone to many free surgical missions for help but always had been given a reason why the mission could not perform his surgery. 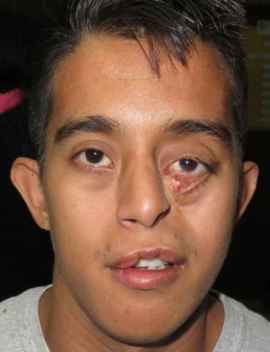 Resty with congenital deformity of left lip and lower eyelid nose and lip-before the surgery he needed.

The newest excuse, however, was baffling to Resty. He had explained to the mission doctor that he would never be able to afford to pay for surgery to save his vision, but again the same answer came: “You are not poor enough!” While it was true that Resty and his mother had sufficient food, shelter, and the other bare necessities, they were like many other Filipinos—they could not afford anything costly such as corrective surgery. One could only guess as to the real reason why Resty was denied the surgery he desperately needed.

Having been turned away so many times, Resty began to prepare psychologically for the loss of vision in his left eye, not to mention a lifetime of encountering stares when venturing into public. Nevertheless, he and his mother felt that they should keep trying to find a volunteer mission that would help.

It was with this reasoning in mind that Resty and his mother intrepidly came to the cleft palate mission at the Cadiz, Philippines, District Hospital. They had become familiar with the mission groups that came every year to the larger nearby city of Bacolod. Each of the groups had turned Resty away several times. It may have been for this reason that Resty and his mother had decided to come to the Cadiz hospital to seek help from a group they had not heard of before. The group was the International Children’s Surgical Foundation. Resty felt certain that the new group would be like the others and find a reason not to operate, especially since the group had the word Children in its name, and he was then 20. 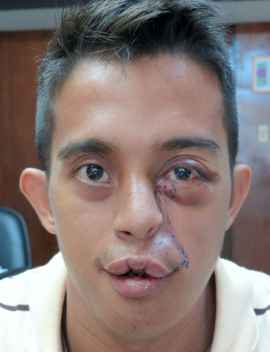 After 5 hour surgery, Resty is greatly relieved that he can now close his left eye and will not lose his eyesight, thanks to ICSF’s donors and the ICSF medical team.

As I began to examine Resty on the first day of the mission, I sensed an air of hopelessness in Resty’s countenance. The eyelid deformity was one of the worst congenital lid deformities I had seen. I could see scarring of Resty’s cornea from years of sleeping with his eye uncovered. I knew that without surgery the young man in front of me would lose the vision in his left eye, which would mean that he would no longer be able to see in three dimensions. Common tasks such as riding a bicycle would be difficult, not to mention many of the jobs available to people in his region.

As I looked at our surgical schedule, I unhesitatingly gave Resty his surgery date. His first expression was one of disbelief. He might have been imagining what excuse I would give to not operate. He began to radiate a feeling of hope as reality set in—he actually was going to get surgery.

When Resty’s surgery date came, I looked at him as he was lying anesthetized in front of me on the operating table. I felt privileged to be part of an organization that takes on complicated patients who have been rejected by other mission groups. Resty’s surgery took five hours but was extremely satisfying.

When Resty came for his post-operative follow-up visit, he was all smiles. He knew that his worries about his vision and his future were over. He also knew that he was now on ICSF’s radar, and that we would be back to evaluate his results and perform the needed touch-ups as well as correction of his lip and nose deformity.

As I think about ICSF’s donors and supporters, I know that not a single one of you would think that Resty was “not poor enough” to receive his sight-saving surgery. Thanks to all of you—for your donations, your support, and your prayers. You are helping to ensure that Resty and many others who have lost hope were “born to smile.”