Ever since the beginning of my full-time service in the developing world, I have wondered how far children in a disadvantaged environment can go with the right set of helps and influences. I think I am beginning to find the answer—and it’s staggering. 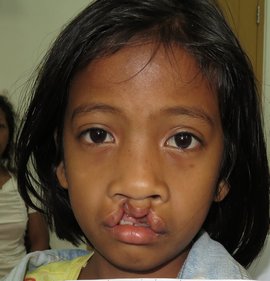 Such was the case with 7-year-old Rosemarie from Libertad, Philippines. As we greeted Rosemarie in her hospital bed prior to her scheduled surgery, I wondered if anything we did surgically would make a difference in her life. She was noncommunicative and refused to make eye contact. Rosemarie reportedly had been teased mercilessly at school, and it showed in her countenance.

I decided that Rosemarie would be a good study case, a study case to determine just how far a child can rise, given the right ingredients. The study began with Rosemarie’s 4-hour surgery for her bilateral cleft lip. A week after surgery the team was able to extract a smile from Rosemarie — which was a welcome start.

The next year, Rosemarie received a special phone call from ICSF’s Philippines mission coordinator, inviting her to come for her cleft palate surgery — which she did. A one-week post-operative check-up, however, revealed a 4mm superficial hole on the right side of Rosemarie’s palate. The good news was that the hole would likely heal well with diet modifications and special instructions. I was glad Rosemarie was an ICSF patient. If she had been the patient of another mission group, there would have been no postoperative check-up to diagnose a healing problem, and Rosemarie would not have received the necessary care for her palate to heal well.

The following year, I was disappointed when Rosemarie did not come to the mission and was not contactable. I was curious to learn how well her palate had healed and whether it was capable of sustaining good speech. I wanted to know how well she was progressing in school and whether she had friends. I also wanted to know if she had any life goals.

As the ICSF team has done many times before, we hopped in a van after the surgeries were finished and set out to find our patient. We drove to the mountain location that was listed on Rosemarie’s ICSF medical records. After nearly a dozen stops, each time asking people if anyone knew Rosemarie or her family, we struck pay dirt. A young man said he knew Rosemarie’s family. He jumped on a motorcycle and led us on a mile-and-a-half trip on a jeep road through the jungle landscape until we arrived at a home out in the middle of nowhere. 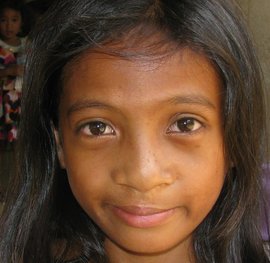 Although it was Rosemarie’s home, her father sadly informed us that she was not there. For a while it seemed as though we had come all that way for nothing. After a short wait, however, we saw a couple of small forms walking down the road toward us. I soon recognized one of the forms as being Rosemarie! As I have made a habit of doing with other children in my care, I ran toward Rosemarie with a big smile on my face and called out, “Rosemarie, where have you been? We have missed you!” Rosemarie and I walked to her house, where we were met by a sizable crowd of neighbors who had heard of the van’s arrival and had gathered out of curiosity. We took photos of our little prize and then began asking about her progress. We learned that Rosemarie had graduated to fourth grade with high marks and now had plenty of friends. We then learned that Rosemarie has decided she wants to become a school teacher. I examined Rosemarie’s palate and found it had indeed healed very well, although she needed speech therapy. We explained to Rosemarie the importance of a school teacher needing to speak properly, to which she agreed. We then invited her and her mother to attend the ICSF speech therapy mission that would be coming soon to the nearby city of Ozamis — to which they also agreed.

As we left the smiling little girl, swarmed with friends around her, I turned around for a last look and envisioned Rosemarie standing in front of a class of eager students. At that moment, I realized that with the right conditions, every child has great, if not infinite, potential, even in the poorest of environments. To our donors, consider yourselves as part of Rosemarie’s success, because you are. Contemplate how far ICSF goes in changing the lives of some of the most underprivileged children in the world. Now perhaps you understand how serious we are about our slogan, Everyone Was Born to Smile. Thank you, each one of you.