The ICSF surgical team, after completing a long day of surgeries, had left the OR to check our pre- and post-operative patients in the hospital ward. We had barely entered the ward when an unusual sight caught my eye at my immediate left. There, all seated in one bed, was a family of three, each member staring expectantly at us. The most noticeable of the three was a small girl with an obvious, severe two-sided (bilateral) cleft lip and palate. But also catching my eye was the mother. She wore a large scarf-like apparel around her neck and upper chest, an odd sight in the hot, steamy climate of the Philippines. 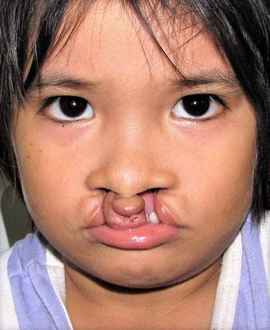 Blessie, age 2, before surgery by ICSF

After greeting the two-year-old patient and her brother, I turned toward the mother and asked why she was wearing such a distinctive neck cover. One of my Filipino assistants whispered to me: “she has a wound.” I then asked the mother if I could see her wound, to which she nodded “yes,” After I formed my team into a semicircle around the mother for privacy she removed the scarf and opened her blouse. I stood aghast as I saw what the scarf and blouse had been hiding. Glaring at me was a large, ulcerated wound the size of a dinner plate. Distressingly, I could see that the wound had eroded very deeply all the way down to the rib cage. My assistant asked further details from the mother and then relayed to me that the woman had end-stage breast cancer for which she was never able to receive treatment. I became somber as I further examined the most advanced case of breast cancer I had seen in my 37 year of medical practice. I then took note of the mother’s overall cachectic condition, realizing that this disease would soon claim her life, a reality she also seemed to be aware of.

After regaining my composure we checked the other patients in the room and then again passed by the family of three on our way out of the room. On the foot of the bed I saw written the name of our little patient; “Blessie.” As we exited the room, I looked back at the trio on the bed and was overcome with sadness. The sadness quickly gave way to reverence, however, as I contemplated the magnitude of the mother’s devotion to her child. Even in her painful and terminal condition, she had made the arduous trip to the hospital for her little Blessie to receive surgery. It would likely be one of her last acts of love for her child. 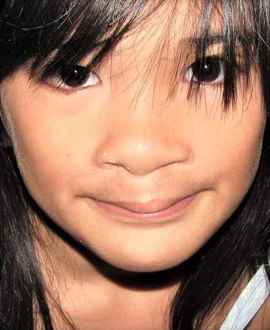 The following day, as I approached the anesthetized Blessie on the operating table, I again contemplated the mother who, in such a great state of discomfort, had come to bring her daughter to the hospital for surgery. Although I often think of the parents as I operate on their child, I felt a special inspiration during Blessie’s six-hour surgery as I thought of the dying mother’s love for her child and her hopes for a successful surgery.

Although the surgery was intricate and challenging it went well. Blessie was discharged with her mother and brother two days afterward. The following week the ICSF team paid a visit to the family at their humble home to spare the mother another journey in her declining condition. We were pleased to find Blessie healing very well. As I said goodbye, however, I sensed that the next time we saw Blessie she would be motherless. At that moment, I vowed inwardly to the dying mother that I would return to complete her daughter’s treatment.

The following year, remembering my inward vow to Blessie’s mother, I was disappointed to not see Blessie’s face in the crowd—and further disappointed to find that her telephone number was not working. Similar efforts by local ICSF supporters to locate Blessie were fruitless. After the failures at locating her, however, a calming impression came to me that a child so loved and cared for, as Blessie had been by her dying mother, would be tended by Divine hands and would be led back to us for her palate surgery.

For two years I did not see Blessie among our patients coming for surgery.

In 2019, a few days after completion of operations for our Dipolog mission, I was exiting the hospital doors and encountered a familiar little face. After a few seconds the word “Blessie!” loudly escaped my mouth. As I uttered her name a large, perfect smile crept across the once-clefted little face. I learned that Blessie’s mother had, as expected, passed away shortly after our first encounter in 2017. Blessie had been brought to the hospital by her older brother, Alz, who had heard we were in the area. Alz was saddened to learn the mission was over but we exchanged phone numbers and made plans for the following year.

In March of this year, Blessie did indeed arrive on time at the Dipolog mission and underwent cleft palate repair with the usual painstaking care rendered by ICSF, followed by the usual attentive aftercare.

Blessie returned the week after surgery for evaluation and was found to be healing well. As I watched her leave the clinic room I thought of her mother, now passed on, and the sacrifice she had made three years earlier to provide for her daughter.

Mothers are, indeed, an integral part of the ICSF story as exemplified by Blessie’s mother. ‘Everyone, including Blessie, Was Born to Smile’!