‘I saw her face many times in my mind’

It saddened me greatly to think that I might never see her again. It was four years ago that she had come to the Hai Phong Children’s Hospital at age ten hoping to have her surgery redone. She had had her bilateral cleft lip treated previously by another team, but the surgery had resulted in a signifi cant deformity. Unfortunately, I was not able to fi t her onto the schedule due to limited availability of personnel at the hospital. Every year since then, I had hoped to see her in the group of patients gathered by the hospital for my visit, but my hope was always in vain. I saw her face many times in my mind. It was a sad but accepting face that had seared itself into my memory. Although I hoped, year after year, that I would see her among the patients coming for surgery, I worried that even if she did come, there might be too many children in need of surgery who had never had surgery—and the hospital would want them to receive priority. The basic problem was that there were not suffi cient hospital personnel available for me to do more than one or two surgeries per day. This had been a perennial problem during each of my visits at the hospital, and there seemed to be no good solution. 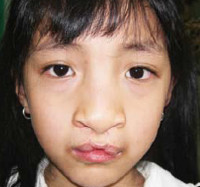 During my 2010 visit, however, an idea popped into my head: Add Hai Phong Childrens’ Hospital as an ICSF team mission site! I would be able to commit to the hospital leaders with confi dence, knowing that ICSF could now handle the more expensive team mission without question—thanks to the generosity of our donors. I was gladdened when the hospital leaders okayed my idea. I called previous ICSF volunteer anesthesiologist Dr. Curtis Rigby, who enthusiastically agreed to be a part of the team. Dr. Mike Foutz, a Boise physician fl uent in Vietnamese, also agreed to come. (See their photo on page 2.) The team was rounded out by ICSF nursing coordinator for Southeast Asia Flor Moya, Philippine-born American nurse Amelia Flaherty, and ICSF-trained Philippine nurse Noime Infante. As I anticipated ICSF’s fi rst team mission to the Hai Phong Children’s Hospital, I thought again about my young friend whom I had turned away four years before. With our ICSF team, I knew there would be time to treat her . . . if she came. Neither I nor the hospital knew the girl’s contact information or even her name, and so all I could do was hope and pray (which I did).

On the fi rst morning of the mission, as we entered the large parent and patient-fi lled room, I immediately scanned around to see if the girl from four years ago was there. I did not see her—but then why would I expect her to come after four years? And then my eye caught a familiar face. I stared at the face momentarily. I could not believe my eyes—it was her!—after four years of seeing her in my mind only! By my stare, she knew I had remembered her, and her facial expression turned to brilliant anticipation. She smiled and waved shyly. When it was her turn to be examined, the sad eyes I remembered from four years before were now eyes of gladness and hope.

It would be a long operation and I would l have to take a small piece of her rib for a nose graft. The diffi culty was inconsequential to her. She had wanted the surgery four years ago and felt even more adamant now, as she likely had experienced increasing social embarrassment in recent years as a young teenager. As we gave her the surgery date she smiled a smile that only a doctor working with disfi gured children in poor countries knows. I was glad the interpreter had taken over, because I developed a frog in my throat as I realized my prayers had been answered. A miracle was sitting in front of me!

The six-hour surgery to fi x the nose and completely redo the lip went well. Dr. Rigby’s anesthesia was fl awless. In the recovery room as I approached my patient who had waited so long, she could not smile, but her cheeks quivered, which was all the smile I needed. When I fi rst entered her hospital room the next day, she was looking intently at her new nose and lip with a small mirror. I explained that the surgery would look better when the swelling went down and the tape came off. She understood and indicated that she could wait. 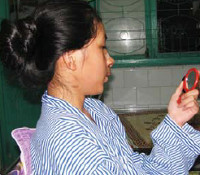 I thought I should share with you this story of waiting, mixed with sadness, but ending in a little miracle—a miracle made possible by you, our ICSF donors. You do more than you will ever know. You do more to cheer little faces and change little lives in far reaches of the world than you can comprehend. Thank you, our donors. You and ICSF are truly creating a world where “everyone was born to smile!”