When Melanie gave birth last June in her town of Kalamansat, Philippines, her initial joy quickly turned to devastation. Her newborn daughter whom she had come to love prior to birth, had a large cleft of the lip. She had seen other children with this drastic deformity and knew that these children, and their mothers and fathers, suffered. As if the trauma of seeing her daughter’s deformed lip was not enough, a few minutes later she was told that her daughter also had a cleft of the palate. Although some of the clefted children that Melanie had seen in her area had received surgery, they seemed to have a flat, twisted or deformed appearance of the lip, and their speech was abnormal. She didn’t want this for her daughter. Melanie’s sadness turned to hopelessness. Her daughter would inevitably suffer a life of teasing, rejection and loneliness. But then Melanie’s mind caught hold of a memory of how she had had a prayer answered in her earlier years. Her fears suddenly left as she pondered this thought. Melanie asked God for help. She was filled with a feeling that help would come. It was only two weeks later that Melanie was searching on the internet for teams that might come to her farflung southern town. Although she learned that no cleft missions came to her region she found something else—a large organization based on the Capital city island of Luzon. With great joy she communicated with the organization on Facebook. “Yes!,” the organization replied, “We provide free surgery.” But then Melanie asked if the organization would help with travel costs for poor families like her as Luzon was two days travel from her home. The representative responded with the bad news that they do not help with travel costs or with accommodations. Melanie’s hope turned once again to despair. 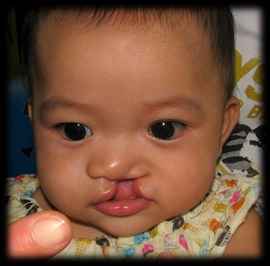 Melanie’s baby after two-day trip, before surgery by ICSF

In September I happened to be researching other cleft organizations that work in the Philippines and came across the Facebook page of the same organization that Melanie had communicated with. Somehow, perhaps due to a computer glitch, I came across the text message conversation between Melanie and the organization official. I read with interest but became saddened that the organization would not help Melanie because of her remote geographic location. Then a light bulb went on in my head. I decided to put Lara, one of ICSF’s full-time Filipino nurses and a Facebook enthusiast, onto the task of contacting Melanie. Lara was successful in finding Melanie and provided her with information about ICSF and how we operate. Melanie soon contacted Lara and said she liked how ICSF works and wanted ICSF to do her daughter’s surgery but, sadly, because of the distance she would not be able to come. As Lara and I conversed about Melanie I thought of ICSF’s donors, many of whom I know personally. Not one of them would deny this young woman the financial help they needed for traveling the two days to ICSF’s Dipolog mission in November. When Lara informed Melanie that ICSF would cover the entire cost of her two day trip and lodging to come to the mission, she was staggered, almost unbelieving but accepted the offer. 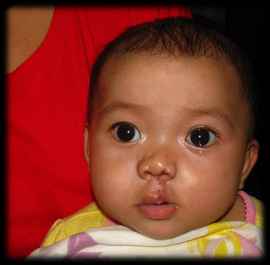 Maxrien, one week after surgery and careful
monitoring by ICSF

On November 8 of this year, Melanie’s dreams were realized when her daughter, Maxrien, had her cleft lip and nose deformity corrected in a three-hour surgery by the ICSF team. ICSF paid for a hotel for a full week to monitor the baby after surgery—in true ICSF fashion.

When Melanie turned to the team before leaving after the final exam, baby in arms, and said “thank you,” I could only think of the miracle that had taken place—the circuitous route through which Melanie’s prayer was answered. Not only did she find the help she needed, she found it through the one team that takes hours for each child’s surgery, along with a full week of follow-up care—and the only team that would pay for a poor family’s expenses to travel from afar to be treated. I was not at all surprised that God would send Melanie to ICSF. In fact, I think many, if not all, of the children we treat are Divinely-appointed to us.

Although Melanie will never, in this life, meet those behind the scenes who facilitated her daughter’s surgery—ICSF’s donors—I can’t help but believe that eternal bonds were formed.

Thank you, ICSF’s supporters, for ensuring that Melanie, her daughter and so many others in similar circumstances, were ‘Born to Smile’.