It certainly was not Jowena’s time in January, 2009. Jowena’s mother had brought her to ICSF’s annual Kabankalan, Philippines, cleft palate mission, hoping to have her daughter’s bilateral cleft lip corrected. The one-year-old little girl had come to the mission healthy, but when her scheduled day for surgery arrived, she had a high fever and a deep cough, necessitating the cancellation of her surgery. Jowena’s beautiful mother received the bad news politely. Her quiet reply, however, “OK, Doc, I understand,” could not hide her disappointment. Although her daughter was only one year old she could not be comforted with the news “You’ll be taken care of next year.” 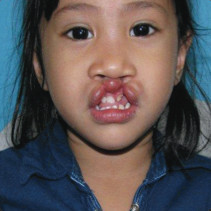 Jowena at age three, prior to surgery.

Many children in similar circumstances wait until next year — but next year never comes. This was Jowena’s mother’s concern. All she could see was her daughter being taunted, teased, and ostracized as she entered school with her unrepaired bilateral cleft lip. What Jowena’s mother did not fully understand was that she was now under the care of a very unique organization. She did not know that ICSF would track her down the following year to make sure that the lip was repaired. All she knew was that many organizations do not return to the same location.

Jowena’s mother was surprised when she received a phone call early the next year from ICSF coordinator Flor Moya asking her to bring her daughter to the upcoming ICSF mission. At the 2010 mission, however, devastating news came yet again. Jowena once more had a significant respiratory infection, and her surgery could not be scheduled. This time, however, the young mother received the news with a smile. She knew, and had heard from other mothers, that ICSF is different from the other groups that come through. Only one month later, nurse Moya called with the good news, asking that Jowena be brought to another nearby ICSF mission. Room for Jowena had been made on the schedule!

By the time the mission date had arrived, I had come to know Jowena very well. On the first day, I scanned the waiting crowd. “There she is!” I said to myself. I was relieved but not surprised that Jowena and her mother were there waiting. 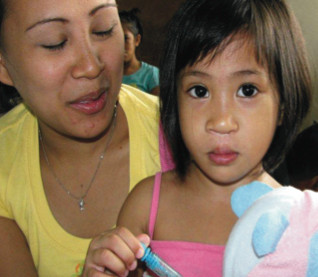 As the mother and daughter walked, hand-in hand, into the screening room and over to my desk, my beaming smile faded as they came close. I couldn’t believe what I saw. Jowena had a purulent infection on the left margin of her cleft lip! I breathed a long sigh as I looked at the infection under magnification. It had started two days before, according to her mother. Again, I had to deliver the bad news. Jowena would have to wait — again. Thankfully, the mother received the news with confidence. She had come to know that her daughter was on ICSF’s radar screen and that her daughter’s “time” would come. Finally, in March 2011, Jowena came —  completely healthy!

She was scheduled on one of the first days of the mission to make sure that an infection didn’t creep in as had happened three times before. Jowena’s time had finally come! She and her mother were both tearful when they said good-by to each other as she was carried by Dr. Kevin Kartchner into the operating room. Dr, Kartchner also had come to know Jowena well. One would have thought he was carrying his own daughter to the operating room judging by the way he cradled her in his arms.

All went well, and after a four-hour surgery the sleeping little girl was delivered back into the arms of her mother. Jowena’s mother gave profuse thanks and shed tears of joy. She may have felt lucky or blessed to find an organization like ICSF, an organization that has a radar screen for its patients in some of the poorest countries of the world.

Thank you, our donors, for making it possible to finally perform Jowena’s surgery, with all the care and time that similar children receive in America and other developed countries. “Everyone,” indeed, “was born to smile’.”