The mountainous Philippine countryside flew by as I sat on the back of the motorcycle taxi. As I looked to my right side I got a fleeting glimpse of a child by the side of a small house. Although the scene rapidly fled my view, the image of the child’s face caught in my mind. There was something troubling about the image—and then I realized that the child had a severe facial deformity.

I quickly tapped the driver on the back and asked him to turn around. When we arrived at the place where I had seen the child, there was no one to be found. For a minute, I wondered if my mind had played a trick on me. I decided to knock on the door closest to where I thought I had seen the child. A young girl with a normal face answered. There were a number of children behind her, each straining to get a glimpse of the foreigner at their door, but none had a facial defect. 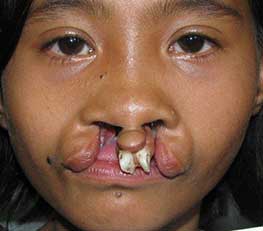 The girl spoke little English, but when I pointed to my lip to indicate who I was looking for, she smiled, nodded her head, and then invited me in and pointed to a door leading to a back room. I ventured through the door and into the poorly lit room. When my eyes acclimated to the dark, I saw a figure in the corner. As I inched closer, I could see the child was a girl. Her face was angled downward and partially covered by stringy hair. She wore no shoes, and her dress was dirty and tattered. She was obviously intimidated by my presence.

“Hi there,” I said in my kindest voice possible. The girl looked up a bit, revealing a wide bilateral cleft lip. After remembering that I had a pack of plain M&Ms in my pocket, I retrieved it and held it out to the cowering little figure. After a brief moment the girl surprised me by snatching the candy from my hand and then shrank back into the corner.

I regretted that we could not correct her cleft lip at that time. Our yearly mission in Kabankalan City was essentially over. As I left the room, I said,“Goodbye, young lady.” The girl girl only stared as I left. As I left the house, the girl at the door surprisingly said, with a smile, “Her name is Pinky!” After getting back on the motorcycle, I made a map on a piece of paper as we traveled, describing how to get to Pinky’s house, and tucked it into my pocket for the ride back to the city. I was determined to operate on Pinky’s cleft lip the following year. It was obvious that her life was going nowhere without corrective surgery. That night as I reached into my pocket, I discovered, to my horror, that the paper with directions to Pinky’s house was gone. I tried to reconstruct the route to her house in my mind but felt sick as I realized that I probably could not remember the way back to the house.

Throughout the ensuing year, I thought of Pinky often, hoping that somehow her mother would receive word of the upcoming mission, although I questioned if Pinky even had a mother.

The following year at ICSF’s 2011 mission to Kabankalan, as I entered the crowded waiting area I scanned the room for Pinky—but was saddened to not see her there. I was met with the same sadness in 2012, at which time I resigned myself to the possibility that the chance to help Pinky was forever lost. She would go on to live a life of hardship and would likely never attend school, due in large part to her cleft lip. 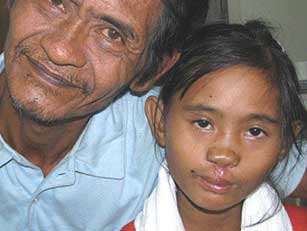 Pinky and her father after her surgery

ICSF’s 2013 mission saw a record crowd come to the Kabankalan mission. Ninety-nine patients were present in the waiting room on the first day. About midway through the day, our operating schedule was filled up, which required us to schedule an impromptu followup mission a few months later to take care of the remainder of the kids who needed surgery. A little later in the afternoon, into the exam room walked a child who looked vaguely familiar. As the girl stood there with her father, I got up from my chair and walked over to her. I knew the face—IT WAS PINKY! I told Pinky how relieved I was to see her but then realized that the operating schedule for the present mission was completely full. I was, however, grateful that ICSF does follow-up missions to treat those who come late. Pinky was given a surgery date for a few months later.

Pinky and her father did indeed keep the later appointment. The ICSF team took six hours on Pinky’s surgery because of the complexity of her deformity. We learned after the surgery that my fears were well-founded about Pinky’s mother. She had died a couple of years before I first met Pinky. It relieved me greatly to know that we had been given a second chance to give this young girl a fresh opportunity in life, especially in view of the challenge of growing up without a mother.

I want to say thank-you to our supporters for making it possible for ICSF to schedule follow-up missions so that no one has to be left behind. It’s because of you that we have the financial resources to take care of those who come late—those at the end of the waiting line, like Pinky. It is because of you that we can say that even Pinky “was born to smile.”