View the video It's Their Time

Our son, David, constantly drooled. Because of his cleft palate, his bibs would get soaked. He would spit up volumes and required constant clean-up. It was a hard time for us, his family.

David also had numerous ear and respiratory infections and asthma, all probably made worse because of the cleft palate. In 2002, we were accepted into the Shriners’ Cleft Research Program in Galveston. One of the doctors on the team was Dr. Geoff Williams. 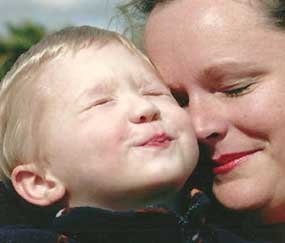 David with his mother, Dawn

Although he was focused and businesslike, he was patient with our boy and joked as he looked at his palate. I thought, “I sure hope he is our surgeon.” David’s scheduled surgery was postponed for a week due to a cold. This was hard for us to hear. Geoff explained that our son’s health and safety were his top concern, and now was not the right time.

On the day of the surgery, I was doing a video job in South Korea, so my father and father-in- law were with my wife and David when they met Dr. Williams at 6 a.m. The procedure was successful, although my wife had to hold David all day and into the night.

My father commented that on his rounds at 11 p.m., after an 18+ hour day, Geoff was very patient and tender with our agitated child. I didn’t see Dr. Williams on our follow-up visits, and we were told that he had left Texas to do medical missions full time.

Several years later, I was prompted to get in touch with Dr. Williams. After Googling him, I found that he travels close to 300 days a year, doing volunteer surgery in poor countries. After talking with him, I knew I had found a story.

I met him in Oaxaca, Mexico, and followed him for a week to capture his work on film. The trip reinforced my thoughts of how unique Dr. Williams’ practice is. Watching him work always brought me back to the idea that “the patient comes first.” 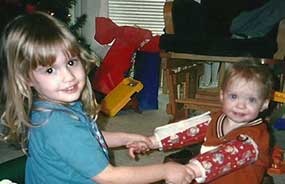 David plays with his sister, Lauren

I asked how he could do his long, six-day-a-week, more than 12-hour surgical schedule on some missions and still do careful, painstaking work for every patient. He responded, “Whether they have waited a year or 30, they have waited their whole life for this. This is their time, and I won’t take it from them.” I saw him hike to a bus stop, ride a bus, catch a cheap cab with five other riders, then hike the rest of the way to the hospital. It took 2 hours to get there. I asked, “Why not hire a car?” and he said, “It costs $2.50 a day to travel this way. A car costs $12. I save $200 in two weeks, which allows me to treat more kids.” (This is the case in Mexico, the Philippines, Vietnam, and other locations.)

David is now 11 years old, a straight-A student, a friend to the friendless, and he and his sister swim like fish. My hope for my video project is that it can become a series that inspires people to know that they can make a difference.

After the Oaxaca trip, Bayou City Productions (Houston, Texas), which supplied the camera and support, edited the piece at no cost (Chris Kyle, editor). Bill Petticrew helped write and produce it, and Peter Leech worked with me on the music.