“A record number of surgeries is being made possible by our donors. We had expected to see donations decrease during the economic downturn, but this has not been the case,” re- ports ICSF President Dr. Geoff Williams. “I don’t know how we could be this fortunate in these hard times—but we are. I hope God pours out many blessings upon our good supporters for the help they are making possible around the world,” says Dr. Williams.

Kenyan patient Beatrice was the victim of the intentional throwing of acid onto her face in 2003. It left dark and dense scarring as is seen here before the second surgery, of her staged chin reconstruction (with surgically placed tissue expander under chin, left). Five months after surgery, the dark, dense scar on her chin was removed, and replaced with normal expanded skin from her neck. (right) 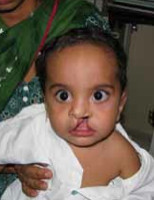 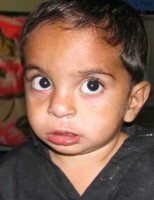 Pakistani boy before surgery (above), and ten months after surgery (right)