None of the kids in Sandangan, Zamboanga Del Norte, Philippines, knew who the mysterious new girl was. She had suddenly appeared as though she belonged there. Then...rumors began to spread that it was Rosemarie Cueresma, although no one really believed it—at first. 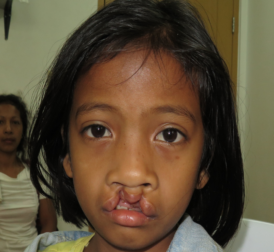 Rosemarie before surgery (above), and two weeks after surgery (below). 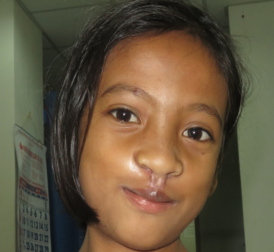 Rosemarie had been the ugly duckling of Sandangan, teased and picked on everywhere she went, including school, because of her bilateral cleft lip. She had no friends, and no one wanted to be seen with her. Rosemarie’s life was as miserable as it could be for a seven-year-old girl. Dr. Geoff Williams commented on his first encounter with Rosemarie: “She was sullen and noncommunicative. She did not make eye contact with anyone—like many of the kids with severe cleft deformities we see in this age group.

“Rosemarie’s operation took four and a half hours and was particularly challenging,” recalls Dr. Williams. “But it was an overwhelming success. We were able to create every element seen in a beautiful lip.”

When Rosemarie failed to come to her follow-up clinic appointment, ICSF nurse Christine Arancillo called and learned that the family did not return to be evaluated because they did not have enough money for the transportation fare. As is ICSF’s policy in this situation Ms. Arancillo asked the mother to borrow the money for the return trip and then upon arrival at the clinic, she would be reimbursed the whole round trip cost of the fare—to which the mother agreed. Upon arrival, Rosemarie was found to be healing very well. Then emerged the interesting story of the reaction of the other children in the village after Rosemarie came home from the hospital. The mother reported that the other kids did not recognize her daughter. When they learned that the “new girl” was actually Rosemarie, the kids were in awe. The teasing never did start up again, stated Rosemarie’s mother.

Dr. Williams recalls, “As Rosemarie stood there in the clinic and the flashes of cameras went off, it was reminiscent of a model shoot. It was certainly no ugly duckling standing there before us.” Then, for the first time, Rosemarie smiled in the presence of the doctors and nurses. “It was more than enough pay for me—to see this young girl smile and to know that she would not be teased again”, says Dr. Williams.