Click any image to enlarge the Before and After photos.

ICSF took nearly three hours to perform this boy’s surgery. The difference observed before, and 8 days after his surgery; however, justified the time spent during the operation. Some of America’s most revered cleft surgeons, when performing surgery in the United States, routinely take several hours to carry out such an operation, a necessity in their minds for achieving beautiful and long-lasting results. Such time and attention is difficult to provide to children when they are treated by volunteer teams that schedule large numbers of children for surgery in a short period of time. ICSF believes that third world children are no less deserving than American children when it comes to the amount of individualized time and attention that is provided during their treatment, and ICSF plans its missions accordingly.

26-Year Old Millisant suffered from a condition known as orbital plexiform neurofibromatosis. She was not able to find treatment for her condition partly because American volunteer teams traveling to Kenya routinely pass up children with complex deformities. Millisant, after surgery (right), keeps a photo of herself before treatment to remind her of how far she has come.

Two-sided cleft lips are severe deformities that require more operative time than one sided clefts, a fact that is never ignored by ICSF. Because of the time and care taken by ICSF to fix this Vietnamese child’s deformity, he will never be stigmatized as a hare lip as many children are after having undergone hastily-performed surgery.

This Kenyan baby displays an extremely wide cleft lip along with a severe deformity of the nose. Adequate attention is needed to correct all of the facets of both the lip and nose deformity.

This 6-year old Filipino girl’s deformity, caused by a serious burn, requires special expertise and longer operative time for successful treatment – a fact which causes some volunteer organizations to refuse treatment. ICSF believes that no child with a deformity that can be treated should be passed up.

ICSF's mission includes training local doctors to treat their own patients. Teaching surgical principles and technique can only be accomplished safely in a one-on-one fashion over extended periods of time. ICSF's committment to this kind of methodical training over time is unique among surgical volunteer organizations.

Vietnamese child with unilateral cleft lip before and one year after surgery. Consistently good long-term results can only be achieved when adequate time and attention is given to all aspects of the deformity, including the nose. 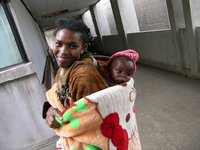 This Kenyan mother suffered great anxiety when her baby was born with a cleft lip, knowing that in Kenya it can be difficult for the poor to find treatment. In this photo she is leaving the hospital after her baby received surgery from ICSF. Her smile says it all.

7-year old Marissa tries her new smile just 6 days after surgery. Because of the time and care taken during her operation, Marissa will likely not be stigmatized as a hare lip as many children possibly can be after having had hastily-performed surgery.

Wide clefts require special attention so as to avoid post-operative deformity which can cause the child to be stigmatized as a hare lip even though surgery was performed. This Pakistani child’s cleft was treated with this philosophy in mind and demonstrates a very good result one year after surgery.

This child's bilateral cleft lip required 4 hours to correct due to the many aspects of the deformity which needed to be addressed. ICSF feels that children living in poor countries deserve the same amount of time and attention as American children receive in large U.S. cleft palate centers.

This 19-year-old Peruvian girl was born with a very rare deformity, a congential fibroplpoma. She was treated unsuccessfully on four occasions all with no improvement. She had given up, thinking that her condition was untreatable. ICSF performed her 5 hour surgery free of charge and then returned the following year to perform another surgery.

This 26 -year-old Pakistani man had suffered with facial plexiform neurofibromatosis or "elephant man syndrome". He had sufferd so extensively that he had attempted to end his life on two occasions. There were no surgeons in his country who had the training to deal with his deformity until Dr. Williams performd his 9-hour surgery. Irfan now feels as though he is part of the human family.

This 11-year old Brazilian boy was kept out of school by his mother because she wanted to protect him from the teasing and rejection she knew he would face. After his surgery, Francisco looked in a mirror and exclaimed, "now I want to go to school"

A child's true beauty can be unmasked if surgery is performed with painstaking care and adequate time is dovoted to all aspects of the defect. In missions where large numbers of children are treated in a short time period this is not always the case. Christy and her family enjoys the results of a surgery that was not rushed but rather was performed with the same level of care as children receive when undergoing surgery in the United States.

3-year-old Pei Liu suffered from a rare condition known as a Tessier no. 4 bilateral oro-ocular cleft. Because of the complicated nature of her condition Pei Liu was passed up by a number of volunteer teams that came to her town in China. A hospital in Nanjing contacted ICSF requesting that surgery be performed for Pei Liu. The surgery took 7 hours and was observed by 20 Chinese doctors. The story of Pei Liu's treatment was reported via the news to a Chinese viewing audience of 20 million.