The noblest little ones

As I continue to meet children in the developing world, I am at times constrained to stand in open-mouthed awe at the level of nobility that can be observed in these little ones in such poverty-stricken environments. Such it was with four-year-old Lianne Tabuyan during ICSF’s Kabankalan, Philippines, cleft palate mission in January. I first came to notice Lianne on about the third day of the mission, as she would routinely accompany me as I made rounds to see the other patients each day. I began to look forward to having my little “helper” there with me to occasionally hold a Q-tip or other item as I cleaned the lips of the operated patients. I couldn’t help but notice Lianne’s cleft lip with its unusually small and underdeveloped lateral segment. 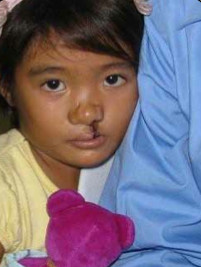 I began to worry about the challenging nature of her surgery, and whether there was a good outcome in store for my little friend. On the morning of Lianne’s surgery, the first thing I thought as I awoke was, today is Lianne’s surgery—how am I going to deal with that lateral segment?

I was apprehensive throughout the day, worrying about Lianne’s surgery and its special challenge. Around 6 p.m. I was in the patient ward and decided to head to the operating room to see how preparations were progressing for Lianne. The sight that confronted me there at the double doors of the operating room did not particularly help my spirits. There was Lianne in the arms of her father, with her arms wrapped around his neck and her head hidden from my view behind her father’s head. Her IV emanated from her right hand. The tubing dangled down and behind where her teary-eyed mother dutifully held the IV bottle above head level.

As I approached the trio, wanting to get through the doors, I said, “Excuse me, please.” Upon hearing my voice, Lianne turned her head and craned around her father’s face to see who was there, tears streaming down her cheeks. I thought, she’s going to press away from me and hide behind her father, like the other kids do. Instead, surprisingly, the little hand, tethered by its IV, reached out to my face. What was Lianne doing?!, I inwardly exclaimed. As I stood motionless, Lianne began to lean toward me. She then placed her hand behind my head and gently pulled me toward her and her father. The little arm then pulled me into a full, three-way embrace with the two of them. As our three heads touched, I felt uncomfortable at first. Soon, however, I realized that the four-year-old was offering comfort to all, including her surgeon, at this time of separation from her parents into the unknown waiting behind the operating room doors.

I fought to hold the tears back. A four-year-old offering comfort to her surgeon! She must have been the only one who knew I needed it. As I made my way through the operating doors, I felt strengthened by the experience I was leaving behind me.

Lianne’s anesthesia and surgery went well. At the beginning of anesthesia, in keeping with her character, Lianne held the oxygen mask to her own face, unassisted (the same mask that many kids view as a dire enemy—to be fought off at all costs). 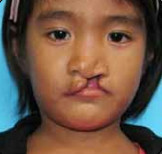 That night I felt a glow, to think that, in one of the poorest countries of the world, one so young could act with such bravery and compassion as to reach out to comfort her surgeon during her own time of grief.

We at ICSF are finding the noblest little ones in the world and helping them in a way that they cannot help themselves. God bless little Lianne! God bless our donors who paid for her surgery! As always, “Everyone Was Born to Smile!”