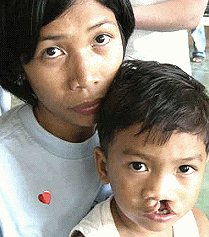 "They're just so destitute in some of those countries that she thought that it was impossible to fix. She thought nothing could ever be done.”
— Dr. W. Geoff Williams

In poor countries, parents of afflicted children suffer great anxiety for the future of their children, not knowing if the child will ever receive needed treatment.

Each year an estimated 250,000 children in developing countries are born with, or incur debilitating deformities. Short-term medical teams from the US and other Western countries are able to treat only a fraction of these children, leaving untold numbers untreated. These untreated children not only suffer from their deformities but also must endure rejection by peers and society, leading to permanent psychological damage. 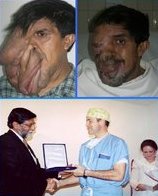 Irfan did not always look like a monstrosity. In fact, he was born completely normal-- into a poor, but happy Pakistani family. One day, however, when Irfan was a child, his parents noticed what looked like a pimple over his right eye. The pimple did not go away, but instead, got larger. As the “pimple” got larger, the surrounding tissues also began to change. As if caught in some kind of a Hollywood nightmare, the change in Irfan’s face continued-and worsened. Within a couple of years, the entire right side of his face had a sagging, discolored and monstrous appearance. By the time he was a teenager, his right upper eyelid drooped down to his chest and his mouth was sagging severely. It appeared to Irfan and his family as if his face was literally melting. By the time Irfan was 20, he began to feel as though he was not human. When he looked into the mirror he saw something that belonged in a zoo, not in society. The distraught family had sought medical care many times only to be told that their son had a strange and rare condition for which there was no treatment. A Pakistani surgeon, the only doctor who tried to help Irfan, attempted to remove a piece of the growth but met severe bleeding. As his condition worsened, Irfan went into a depression and eventually attempted to take his life. Fortunately, he failed. He decided, for a while, to go on living and compensated by wrapping his head in a towel, which was actually necessary because of his inability to contain his saliva. A short time later however, Irfan again became despondent and yet again tried to take his life. When Irfan was 26, his case was brought to the attention of the then Chairman of the Pakistani Senate and current Prime Minister of Pakistan, Mohammedmian Soomroo. Mr. Soomroo was so touched that he made a personal appeal to Dr. Geoff Williams, having heard of Dr. Williams’ previous facial reconstructive work in Pakistan.
In evaluating Irfan, Dr. Williams diagnosed him with plexiform neurofibromatosis, or ‘elephant man syndrome’.

Surgery for the condition is known to be fraught with massive blood loss as well as suboptimal results requiring multiple surgeries. Dr. William’s comments, “When I first met Irfan, it struck me that he was a perfect fit for ICSF because we place value on the individual instead of numbers, and we return to our complicated patients as many times as necessary. Furthermore, the surgery would be an excellent learning opportunity for the local Pakistani surgeons.”

On August 9th, 2007, Irfan was taken to surgery with 8 units of blood ready for transfusion. In a 9-hour surgery, Dr. Williams and his Pakistani assistants removed nearly four pounds of tumor from Irfan’s face and palate and then performed facial reconstruction. “My goal was to make Irfan look human - not perfect. The surgery went very well without any threat to Irfan’s life. The Pakistani doctors were great,” says Dr. Williams. After the surgery and a week in the intensive care unit (left), Irfan feels a new hope for his future. Most importantly, he feels he is again part of the human race. Follow-up surgery is planned for March, 2008.